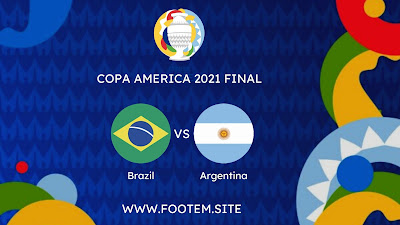 The classic match will be presented in the final Copa America 2021. Two rulers of Latin America, Argentina, and Brazil compete with each other.
The duel of the two teams will take place at the Maracana Stadium, Sunday (11/7) at  5:30 a.m. Indian time. Argentina and Brazil carry different missions.
Argentina has ambitions to end its title drought in this event. The last time the Albiceleste emerged as champions were in the 1993 edition or almost three decades ago.
Whereas Argentina is the second most successful team in Copa America with 14 trophies. Only Uruguay has more titles.
Curiosity also enveloped Lionel Messi. He recorded three failures to bring Argentina to win in the Copa America final.
The Copa America trophy will also silence critics who doubt Messi’s abilities. A number of parties do think that La Pulga is not worthy of being the world’s best player because he has not presented a trophy for his country.
But Argentina and Messi are certain to meet a steep road to fulfill his ambitions. Brazil, which appears at home, will certainly not give in.
Moreover, Brazil is the defending champion. Defending the trophy won two years ago is the Selecao’s target.
Unfortunately, this exciting match will take place behind closed doors. The high number of positive cases of the coronavirus in Brazil has prevented spectators from coming to stadiums.
Team Condition
Argentina can lose full strength in the final match. Cristian Romero, who was injured, is said to have recovered.
While Brazil could not play Gabriel Jesus. The Manchester City star received an additional penalty from CONMEBOL for his red card in the quarter-finals.
The absence of Jesus certainly reduces Brazil’s pounding power. Neymar’s task as the fulcrum of attack will be even more difficult without his presence.
2020-2021 Europa League Final: Through Penalty Shootout, Villarreal Conquers Man United Inter Milan vs Genoa: Match Preview & Confirmed Lineups For Serie A Matchday 1