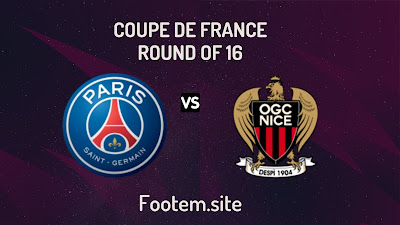 PSG will host Nice at the Parc des Princes for the Coupe de France last 16 2021/22, Tuesday (01/02/2022) at 1:45 a.m. Indian time.
PSG qualified for the round of 16 after getting rid of Vannes in the previous round with a landslide score of 4-0 through Presnel Kimpembe’s goal and  a hat- trick Kylian Mbappe
Meanwhile, Nice qualified automatically because their potential opponents, namely Paris FC and Lyon, had been kicked out of the French Cup after supporters of both teams rioted in the round of 64.
PSG and Nice themselves are both in good condition ahead of this match. In the last match in Ligue 1, both of them managed to win.
PSG beat Reims last Monday with a 4-0 scoreline through goals from Marco Verratti (2), Sergio Ramos, and Danilo Pereira. Meanwhile, Nice won over Metz last week with a score of 2-0 through goals from Khephren Thuram-Alien and Amine Gouri.
For PSG, this victory left them unbeaten in their last 11 matches in all competitions (W7 D4 L0). Meanwhile, for Nice, the win was Nice’s consecutive win in the last 6 matches in all competitions (W6 D0 L0).
This season, PSG and Nice have met once in the French League 1 which took place at the Parc des Princes. In that match, the two were only able to draw 0-0.
World Cup Qualification Chile vs Argentina Match Preview, Live Info & Lineups World Cup Qualification CONMEBOL: Brazil vs Paraguay Match Preview, Live Info & Lineups