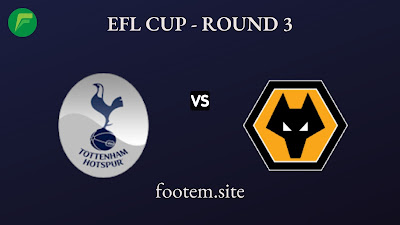 Spurs will visit Wolves’ headquarters at Molineux Stadium for the 2021/22 EFL Cup 3rd round match, Thursday (23/09/2021) at 12:15 midnight Indian time.
Spurs automatically advance to this 3rd round. Meanwhile, Wolves advanced to this round after eliminating Nottingham Forest in the previous round with a score of 4-0.
Spurs and Wolves are both in bad shape ahead of this match.
In the last match, both teams lost in the Premier League. Spurs lost 0-3 against Chelsea, while Wolves lost 0-2 against Brentford.
For Spurs, the defeat left them without a win in the last 3 matches (W0 D1 L2). Meanwhile, for the Wolves, the defeat made them only get 1 win in the last 3 matches (W1 D0 L2).
Spurs and Wolves themselves have met this season, namely in matchday 2 of the Premier League which took place at Molineux Stadium. In that match, Spurs were able to beat Wolves 1-0 with a penalty from Dele Alli in the 10th minute.
Serie A – Round 4: Juventus vs Milan Match Preview & Confirmed Lineups Ligue 1- Round 7: PSG vs Metz Match Preview & Confirmed Lineups