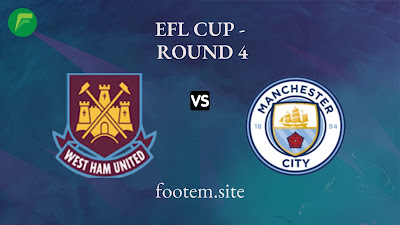 Man City will visit London Stadium, West Ham’s headquarters for the 2021/22 EFL Cup last 16 matches, Thursday (28/10/2021) at 8:30 p.m. Indian time.
Man City qualified for the round of 16 after eliminating Wycombe Wanderers in the previous round with a landslide score of 6-1. Riyad Mahrez became the star of Man City’s victory by buying up 2 goals in that match, while the other 4 goals were scored by Kevin De Bruyne, Phil Foden, Ferran Torres, and Cole Palmer.
Meanwhile, West Ham qualified for this round of 16 after getting rid of Manchester United in the previous round with a narrow 1-0 score. The hero of West Ham’s victory in the match was Manuel Lanzini who scored in the 9th minute.
Ahead of this match, Man City and West Ham themselves are both in a positive trend. In the previous match, both of them managed to win in the Premier League.
Man City won a landslide victory 4-1 at Brighton & Hove Albion last weekend. Meanwhile, West Ham was able to defeat Tottenham Hotspur at home with a score of 1-0 last week.
For Man City, this victory was their winning streak in the last 3 matches in all competitions. Meanwhile, for West Ham, this victory was also their winning streak in the last 3 matches in all competitions.
At the last meeting in the Premier League last season, Man City was able to beat West Ham with a score of 2-1 at the Etihad Stadium. Ruben Dias opened the scoring for Man City in the 30th minute. West Ham had equalized before halftime through Michail Antonio’s goal. However, Man City was finally able to lock the victory through John Stones’ goal in the 68th minute.
EFL Cup: Liverpool vs Preston North End Match Preview & Lineups LaLiga: Barcelona vs Rayo Vallecano Match Preview, Schedule & Lineups