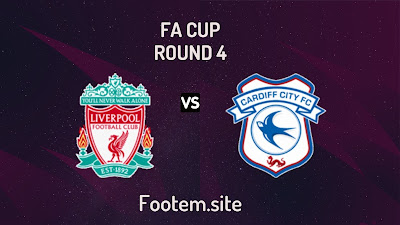 Liverpool will host Cardiff at Anfield for the 4th round of the FA Cup 2021/22, Sunday (06/02/2022) at 5:30 p.m. Indian time.
Liverpool qualified for the 4th round after eliminating Shrewsbury Town in the previous round with a 4-1 score through goals from Kaide Gordon, Fabinho (2), and Roberto Firmino.
Liverpool’s own performance is very good ahead of this match. In their last match, Liverpool was able to beat Crystal Palace in the Premier League with a score of 3-1 through goals from Virgil van Dijk, Alex Oxlade-Chamberlain, and Fabinho. This victory made the Reds without defeat even in the last 6 matches in all competitions (W4 D2 L0).
Meanwhile, Cardiff qualified for the 4th round after beating Preston North End in the previous round with a score of 2-1 through goals from Isaak Davies and Mark Harris.
Cardiff itself is also in good shape ahead of this match. Last Thursday, Cardiff just won over Barnsley in the Championship with a score of 1-0 through Uche Ikpeazu’s goal. It was Cardiff’s second win in a row after beating Nottingham Forest 2-1.
Liverpool and Cardiff last met in the 2018/19 English Premier League which took place at the Cardiff City Stadium. In that match, Liverpool was able to beat Cardiff with a score of 2-0 through Georginio Wijnaldum and James Milner.
Ligue 1 Round 23: Lille vs Paris Saint-Germain Match Preview & Confirmed Lineups Premier League Round 24: Burnley vs Manchester United Match Preview & Confirmed Lineups