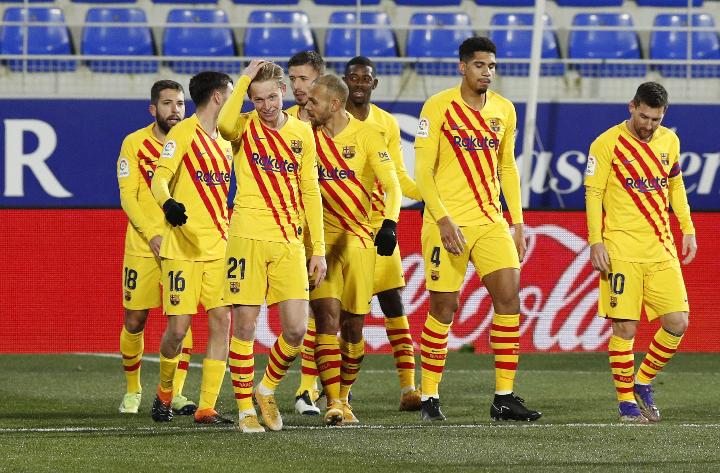 The match between Granada and Barcelona in the Copa Del Rey quarter-finals will take place at the Los Carmenes Stadium on Wednesday Noon local time or Wednesday Midnight IST.
Ronald Koeman’s troops certainly haven’t forgotten their trip to the city less than a month ago. At that time they played an away match there in the Spanish League continued and came home with a big 4-0 victory. In that match, Lionel Messi and Antoine Griezmann each scored two goals.
If you look at the match records, it looks like Barca will have no trouble overcoming the host’s resistance in this event. Moreover, they now go to the Granada headquarters after recording four consecutive wins in all competitions.
The Catalan team advanced to the last eight with a 2-1 victory over Reo Valecano. The last match in the Spanish League, they beat Athletic Bilbao 2-1 at home on Sunday Midnight IST.
Meanwhile, Granada advanced to the quarter-finals after eliminating Navalcarnero 6-0. Before entertaining Barcelona, they played a goalless draw against Celta Vigo.
Apart from the records of the matches they have just gone through, Barcelona certainly has more motivation to be able to win this match. Because, they have to be able to win a trophy. Their chances are great because two of Spain’s top teams, Atletico Madrid and Real Madrid have been eliminated in this event.
““It will be very different from the games in the league. Like us, they also have a lot of games, they even play in European qualifiers. We must not forget that a few days ago we struggled to run our game until we can score goals, everything is open. “Koeman said ahead of the match, quoted from the club’s official website.
“”The cup is not important, but with a few games we are close to winning it. In the league, Atletico Madrid are very strong and all we can do is continue to win and expect to lose points. We lost a lot of points which we should have.”
Barcelona are now 10 points behind Atletico Madrid who are top of the Spanish League standings, with one game they have yet to play. With that distance, the chance for Koeman’s team to become a champion contender is certainly not an easy one, especially since the competition has passed half. The shortest step to be able to get a trophy this season for Barcelona is from the Copa Del Rey.
When facing Barcelona, the home team can again rely on Yan Eteki who has returned from suspension. The midfielder can start to give Angel Montoro time to rest. Neyder Lozano and Maxime Gonalons cannot be played because of injuries.
Meanwhile, Barcelona can play Sergino Dest. Sergio Busquest is out of suspension and can compete in this event. The return of Busquest has the potential to shift the role of Frenkie de Jong. Sergi Roberto, who returned from a long absence, can return to fill the position of right-back.
Three injured players, Gerard Pique, Philippe Coutinho, and Ansu Fati, still have to be patient with their recovery. Apart from them, Koeman decided to leave Matheus and Junior.

Estimated line-ups for Granada vs Barcelona: