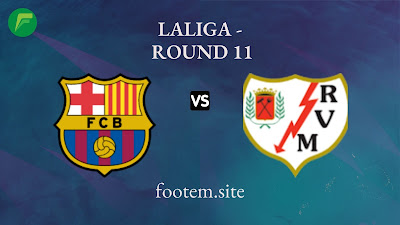 Barca will visit Vallecano’s headquarters at the Estadio de Vallecas to play the 11th Jornada match of La Liga 2021/22, Thursday (28/10/2021) at 10:30 p.m. Indian time.
Barca is in bad shape this season; Most recently, Barca was defeated by rivals Real Madrid in a match titled  El Clasico in La Liga last week with a score of 1-2.
With this defeat, Barca is now stuck in the ninth position of the standings with a collection of 15 points from 9 matches that have been played, 6 points behind the leader of the standings Real Sociedad who have undergone 10 matches.
Facing Vallecano, Ronald Koeman as Barca coach is required to bring his team back to winning ways. The reason is, if you reap negative results then his position as Barca coach will clearly be threatened.
However, winning over Vallecano is definitely not an easy job. Vallecano himself performed slightly better than Barca this season. Currently, Vallecano occupies the seventh position in the standings with a collection of 16 points from 10 matches that have been undertaken.
Vallecano in the previous match had to lose by a score of 2-3 during a visit to Real Betis headquarters in La Liga last week. The defeat made Vallecano only pick 1 win in the last 3 matches (W1 D0 L2).
Barca and Vallecano last met in the last 16 of the Copa del Rey last season at the Estadio de Vallecas. In that match, Barca was able to beat Vallecano with a score of 2-1. Vallecano had taken the lead through Fran Garcia’s goal in the 63rd minute. However, Barca was able to reverse the position through goals from Lionel Messi in the 69th minute and Frankie de Jong in the 80th minute.
EFL Cup: West Ham vs Manchester City Match Preview & Confirmed Lineups Ligue 1: PSG vs Lille Match Preview & Confirmed Lineups