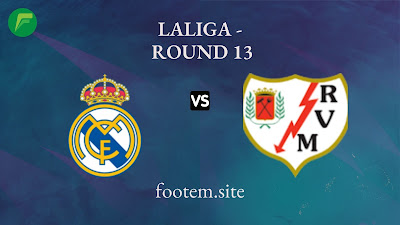 Madrid will host Vallecano at the Estadio Santiago Bernabéu for the 13th jornada match of La Liga 2021/22 , Sunday (11/07/2021) at 1:30 a.m. Indian time.
Madrid has performed quite well in La Liga this season. Currently,  Los Blancos are in second place in the standings with a collection of 24 points from 11 matches, only 1 point behind Real Sociedad who are at the top of the standings from 12 matches.
Ahead of this match, Madrid itself is in high confidence following its victory over Shakhtar Donetsk in the Champions League last midweek with a score of 2-1 through  Karim Benzema’s brace. The victory left Madrid untouched by defeat even in the last 5 matches in all competitions (W4 D1 L0).
Meanwhile, Vallecano has also appeared quite impressive this season. Vallecano is currently in the sixth position in the standings with a collection of 20 points from 12 matches played.
In his last match, Vallecano was able to get 1 point after a goalless draw against Celta Vigo in La Liga last Tuesday. The result made Vallecano only swallow 1 defeat in his last 4 matches (W2 D1 L1).
At the last meeting in the 2018/19 La Liga season, Madrid had to bear the shame after being defeated by Vallecano with a score of 0-1 at the Estadio de Vallecas. The only Vallecano-winning goal in that match was scored by Adri Embarba in the 23rd minute through the white point.
Ligue 1: Bordeaux vs PSG Match Preview & Schedule Serie A – Milan Derby: Inter Milan vs AC Milan Match Preview, Schedule & Lineups