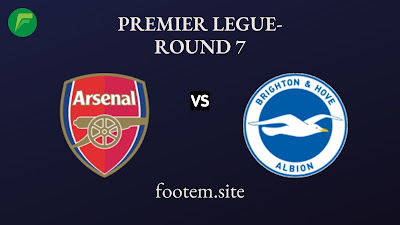 Arsenal will visit Brighton’s headquarters at The American Express Community Stadium to play match week 7 Premier League 2021/22, Saturday (02/10/2021) at 10:00 p.m. Indian time.
Arsenal is in very good shape ahead of this match. Having always lost in the first 3 Premier League matches this season, Arsenal is now starting to return to their best performance.
In the last 3 matches in the Premier League, the  Gunners have always managed to win. They won 1-0 over Norwich City, won 1-0 over Burnley, and lastly won 3-1 over eternal rivals Tottenham Hotspur.
Thanks to his slick appearance, Arsenal has now climbed to the tenth position in the standings with a collection of 9 points.
Meanwhile, Brighton this season has also been impressive. Brighton currently occupies the thirteenth position of the standings with a collection of 13 points, only 1 point behind Liverpool who is at the top of the standings.
In their last match, Brighton drew 1-1 against Crystal Palace. The draw made them only swallow 1 defeat in 6 matches that have been undertaken this season (W4 D1 L1).
At the last meeting in the Premier League last season, Arsenal was able to beat Brighton with a score of 2-0 at the Emirates Stadium. Nicolas Pepe bought two of Arsenal’s winning goals in the match in the 49th minute and 60th minute.
Ligue 1- Round 7: PSG vs Metz Match Preview & Confirmed Lineups LaLiga- Round 8: Barcelona vs Atletico Madrid Match Preview & Schedule