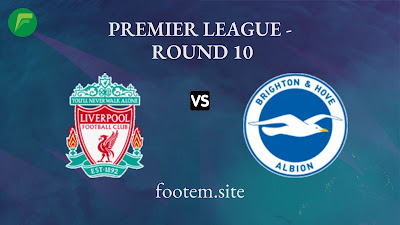 Liverpool will host Brighton at Anfield for the 10th Premier League match week 2021/22, Saturday (30/10/2021) at 7:30 p.m. Indian time
Liverpool is currently in second place in the standings with a score of 21 points, only 1 point behind Chelsea who is at the top of the standings.
The Reds are in good form ahead of this match. Jurgen Klopp’s men have won their last 4 matches in all competitions, with 3 of them keeping a  clean sheet.
In the last match in the Premier League, Liverpool was able to defeat rivals Manchester United at Old Trafford with a landslide score of 5-0 last week. Mohamed Salah became the star of the victory by scoring a hat-trick, while Naby Keita and Diogo Jota scored the other 2 goals each.
After that, Liverpool returned to win over Preston North End in the English League Cup last week. Down not at full strength, Liverpool was able to beat the 2nd division team of the English competition with a score of 2-0 through goals from Takumi Minamino and Divock Origi.
Meanwhile, Brighton has been in bad shape lately. The team nicknamed  The Seagulls is without a win in its last 5 matches in all competitions ( W0 D4 L1 ).
Brighton was knocked out in the Premier League Cup in the middle of last week after losing on penalties to Leicester City with a score of 2-4.
In their last Premier League event last weekend, Brighton was also defeated by Manchester City with a landslide score of 1-4. The defeat to Man City made them drop to the fifth position in the standings with a collection of 15 points.
At the last meeting in the English Premier League last season, Liverpool surprisingly fell 0-1 to Brighton at Anfield. The only winning goal for Brighton in the match was scored by Steve Alzate in the 56th minute.
LaLiga: Real Madrid vs Elche Match Preview, Schedule & Confirmed Lineups Premier League: Arsenal vs Leicester City Match Preview & Lineups