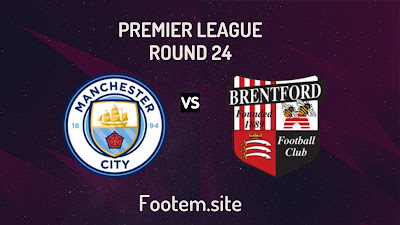 Man City will host Brentford at the Etihad Stadium for the match week 24 Premier League 2021/22, Thursday (10/02/2022) at 01:15 a.m. Indian time.
Man City is currently still comfortably at the top of the standings with a collection of 57 points. Pep Guardiola’s troops are 9 points ahead of Liverpool who are in the second position.
Man City itself is in good shape ahead of this match. Last weekend, Man City was able to win a landslide victory over Fulham in the FA Cup with a score of 4-1 through goals from Ilkay Gundogan, John Stones, and Riyad Mahrez (2). It was Man City’s 9th win in their last 10 matches in all competitions (W9 D1 L0).
Meanwhile, Brentford is currently in the fourteenth position in the standings with a collection of 23 points.
Brentford is in very bad shape ahead of this match. Last weekend, Brentford was defeated by Everton with a landslide score of 1-4 in the FA Cup. It was Brentford’s losing streak in his last 5 matches (W0 D0 L0).
At the first meeting in the 20th match week of the English Premier League this season, Man City was able to beat Brentford with a narrow score of 1-0 at the Brentford Community Stadium. The only winning goal for Man City in the match was scored by Phil Foden in the 16th minute.
FIFA Club World Cup Semi-Final: Al Hilal KSA vs Chelsea Match Preview & Confirmed Lineups Coppa Italia Quarter-Finals: Juventus vs Sassuolo Match Preview, Schedule & Lineups