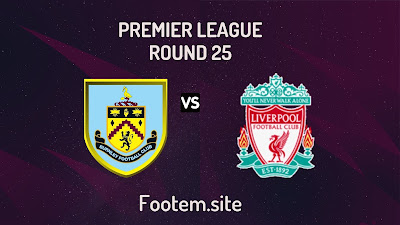 Liverpool will visit Burnley’s headquarters at Turf Moor to play the 25th Premier League match week 2021/22, Sunday (13/02/2022) at  7:30 p.m. Indian time.
Liverpool is currently in second place in the standings with 51 points, 12 points behind leaders Manchester City. However, Liverpool has played 2 fewer games than Man City.
Liverpool itself is in good form at the moment. In their last match, Liverpool was able to pick up a convincing victory over Leicester City in the Premier League last Friday with a score of 2-0 through a  Diogo Jota brace. Thanks to this victory,  the Reds are now without defeat in their last 8 matches in all competitions (W6 D2 L0).
Meanwhile, Burnley is currently languishing at the bottom of the standings with a score of 14 points, 4 points behind Newcastle United in the safe zone.
Burnley’s own performance is not good lately. In their last match, Burnley held Manchester United to a 1-1 draw in the Premier League last week. The result left Burnley without a win even in the last 11 matches in all competitions (W0 D7 L4).
At the first meeting in match week 2 of the English Premier League this season, Liverpool was able to beat Burnley with a score of 2-0 at Anfield. Two of Liverpool’s winning goals in that match were scored by Jota in the 18th minute and Sadio Mane in the 69th minute.
LaLiga Round 24: Espanyol vs Barcelona Match Preview & Confirmed Lineups Premier League Round 25: Tottenham vs Wolves Match Preview & Lineups