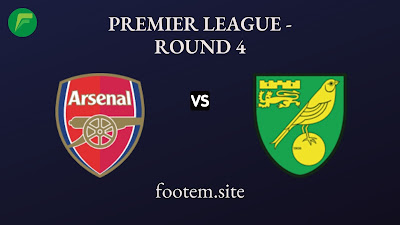 Arsenal will face Norwich in match week 4 of the Premier League 2021/22 which will take place at the Emirates Stadium, Saturday (11/09/2021) at 7:30 p.m. Indian time.
Arsenal have been very bad this season. Currently, the club nicknamed  The Gooners occupies the bottom position of the standings with a score of 0 points due to always losing in the 3 matches they have lived (W0 D0 L3).
In the last match before the international break, Arsenal was crushed in front of Manchester City after swallowing a crushing 0-5 defeat.
Facing Norwich in this match, Mikel Arteta as Arsenal coach is clearly under great pressure. The reason is, he is required to be able to bring Arsenal to victory if he wants his position to remain safe.
On the other hand, Norwich also performed very poorly this season. Norwich is only one level above Arsenal, which is nineteenth in the standings with a collection of 0 points. Just like Arsenal, Norwich also has not tasted victory even in the 3 matches they have played (W0 D0 L3).
In the last match before the international break, Norwich lost at home to Leicester City with a score of 1-2.
At the last meeting in the 2019/20 Premier League event, Arsenal was able to beat Norwich 4-0 at the Emirates Stadium. Pierre Emerick-Aubameyang scored four of Arsenal’s winning goals in the 33rd and 67th minutes, Granit Xhaka in the 37th minute, and Cedric Soares in the 81st minute.
If judging in terms of quality, Arsenal will clearly be more favored over Norwich in this match.
However, Arsenal still has to be vigilant considering Norwich is also eyeing their first win in the English Premier League this season.
Levante vs Real Madrid: Match Preview & Confirmed Lineups For LaLiga Match Week 2 Premier League – Round 4: Leicester City vs Manchester City Match Preview & Confirmed Lineups