Serie A – Round 4: Juventus vs Milan Match Preview & Confirmed Lineups 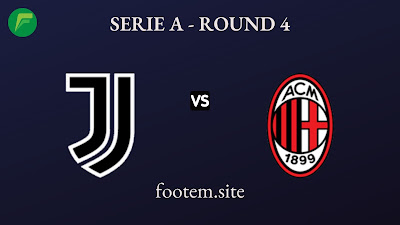 Juve will face Milan at Allianz Stadium in the 4th Giornata match Serie A 2021/22, Monday (20/09/2021) at 12:15 midnight Indian time.
Juve appears very bad in Serie A this season. Currently, Juve is stranded in the sixteenth position of the standings with a score of 1 point.
Of the 3 matches that have been undertaken, Juve has not even won, namely a 2-2 draw against Juventus, and successive defeats 0-1 to Empoli and 1-2 to Napoli.
However, Juve has started to rise ahead of this match. In the middle of last week, Juve were able to pick up a convincing 3-0 win over Malmo FF in their Champions League opener through goals from Alex Sandro, Paulo Dybala, and Alvaro Morata.
Meanwhile, Milan actually performed well in Serie A this season. Currently, Milan occupies the second position with a perfect collection of 9 points after always winning in 3 matches that have been undertaken. They won over Sampdoria 1-0, Cagliari 4-1, and Lazio 2-0.
But unfortunately, Milan’s slick record was tarnished in the Champions League opener in the middle of last week. Facing Liverpool, Milan had to give up with a thin score of 2-3 at Anfield.
At the last meeting in Serie A last season, Juve was humiliated by Milan with a score of 0-3 at the Allianz Stadium. Three of Milan’s winning goals in that match were scored by Brahim Diaz in the 45+1 minute, Ante Rebic in the 78th minute, and Fikayo Tomori in the 82nd minute.
Premier League- Round 5: Chelsea vs Tottenham Match Preview & Confirmed Lineups EFL Cup- Round 3: Tottenham vs Wolves Match Preview & Schedule