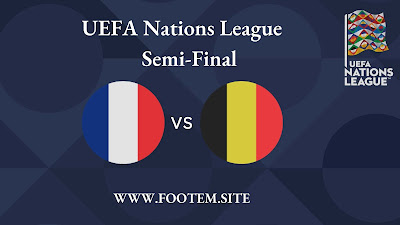 Belgium will face France at Allianz Stadium for the 2020/21 UEFA Nations League semifinal match, Friday (08/10/2021) at 12:15 midnight Indian time.
Belgium qualified for the semifinals after finishing as champions of Group 2 League A with a score of 15 points. The FIFA ranked the first team is 5 points ahead of Denmark who is in the runner-up position.
Meanwhile, France qualified for the semifinals after finishing as champions of group 3 with a collection of 16 points. France is 3 points ahead of Portugal who finished as group runners-up.
Belgium swallowed a failure at the EURO 2020 event. Their steps were stopped in the quarter-finals after being defeated by Italy with a score of 1-2 who managed to become champions in the event.
However, Belgium’s performance after that was very good. Belgium has always won in 3 of its matches in the 2022 World Cup Qualifiers after being eliminated at EURO 2020. They won over Estonia with a score of 5-2, the Czech Republic with a score of 3-0, and Belarus with a score of 1-0.
On the other hand, France at the EURO 2020 event was also eliminated in the quarter-finals. France was surprisingly eliminated by Switzerland after losing on penalties with a score of 4-5.
After the defeat, France’s performance also did not improve. In the next 3 matches in the 2022 World Cup Qualification event, France was only able to pick 1 victory, namely against Finland. Meanwhile, the other 2 matches ended in a draw, namely against Bosnia-Herzegovina 1-1 and Ukraine 1-1.
Belgium and France last met in the semifinals of the 2018 World Cup which took place at the Saint-Petersburg Stadium. In that match, Belgium had to admit the advantage of France with a score of 0-1 through Samuel Umtiti’s goal in the 51st minute. In this event, France was able to ensure themselves as world champions after defeating Croatia in the top party.
UEFA Nations League Semi-Final: Italy vs Spain Match Preview & Confirmed Lineups World Cup Qualification: Brazil vs Venezuela Match Preview & Schedule