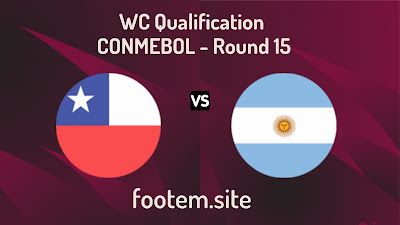 Argentina will visit Chile’s headquarters at the Estadio Zorros del Desierto for matchday 15 of the 2022 World Cup Qualifications in the South American Zone, Friday (28/01/2022) at 5:45 a.m. Indian time.
Argentina actually does not have any interest in the remnants of this 2022 World Cup Qualification match. The reason is,  La Albiceleste, which currently sits in second place in the standings with a score of 29 points, has been confirmed to have qualified for the finals along with the top standings, Brazil.
Nevertheless, it is believed that Argentina will not let their opponents in these remaining matches win easily. Argentina certainly wants to maintain its good record in the 2022 World Cup Qualifiers so far. Of the 13 matches that have been played, Argentina has not even lost (W8 D5 L0).
In his last match, Argentina was able to play a goalless draw against Brazil. This result makes Argentina now recorded without defeat even in their last 27 matches in all competitions (W18 D9 L0).
Meanwhile, Chile is currently still struggling to get to the finals zone. Chile currently occupies the sixth position in the standings with a collection of 16 points.
Chile itself is in pretty good condition ahead of this match. In their last match, Chile was able to win over El Salvador in the test match with a score of 1-0. The victory made Chile only swallow 1 defeat in the last 6 matches (W4 D1 L1).
In the first meeting in the 7th match of the 2022 World Cup Qualifiers, Argentina was held to a 1-1 draw by Chile at the Estadio Nico Madre de Ciudades. Argentina took the lead through Lionel Messi’s penalty in the 24th minute, but Chile equalized through Alexis Sanchez’s goal in the 36th minute.
After that, the two met again in the 2021 Copa America group stage match which took place at the Estádio Nilton Santos. In that match, the two teams again drew 1-1. Argentina took the lead through Messi’s goal in the 33rd minute, but Chile equalized through Eduardo Vargas’ goal in the 57th minute.
World Cup Qualification CONMEBOL: Ecuador vs Brazil Match Preview, Live Info & Confirmed Lineups Coupe de France Round of 16: Paris Saint-Germain vs Nice Match Preview, Live Info & Lineups